The Georgie Gazette #15: Ask me anything, working on a new design, how my leg is recovering

My birthday is later this month. Which means that soon, my 27 by 27 list will be revisited and I can tell you everything that I have failed (or completed). I won’t go into any detail on it now (even though I promised regular checkpoints and have so far done like, practically none), but I don’t think I will do anything similar in the future – no “30 by 30”, not even “28 by 28”… like my good friend Jane, I don’t always like sharing goals, and sometimes I think that when people share goals, they always seem to make goals that are far from attainable. I did enjoy sharing my goals this time but I also realised that over the course of fourteen months, the things I cared about changed a lot. I later saw some goals as unrealistic, where I had seen them as very reasonable in the first place. I want to share some semblance of goals/achievements but will discuss that at a later date.

So I mentioned it’s my birthday later this month, and that is when the next Hey Girlfriend! interview is due. I’ve decided to do a special post, and as an ally of the women in tech I have been interviewing, I am going to answer your questions. 🙂 If you have been following the interview series you know that I take pride in asking these inspiring women questions about their passions and interests outside of technology, because they are so much more than their job or their skills in technology. For that reason I am accepting any (appropriate) questions – about my career, focusing on your career, life in general, advice on work/life balance, hobbies I have that you have seen me blog about, fashion, minimalism, travelling, technology I use, and so on.

Working on a new design for my blog

I don’t want to reveal too much about this yet but I will do a bullet point list:

I injured my leg really badly about ten days ago, falling down stairs. It’s healing faster than I expected, but still, not fast enough. 😆 I am still struggling to walk on it properly. Today was the first day I went back to work at the office. I had worked from home last week, except for Tuesday because I was physically and mentally feeling shite, so I slept most of the day. It started as a big struggle, but I’m healing. 🙂

I’m of course, bummed about not being able to train my legs at the gym. But it’s been an excuse to train my upper body as hard as I possibly can. The doctor advised me to not lift anything heavy or anything that will put stress on the lower half of the leg. I’ve been able to lift weights while sitting, so chest press, bench press, shoulder press, seated row… all of those are fine. I couldn’t do any cardio, of course, but there is a hand cycle machine at my gym. Yes, it’s exactly what you think it is. 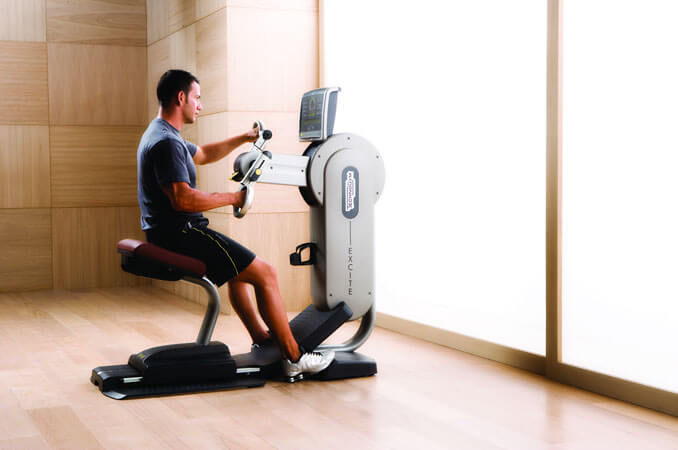 Hand cycling is a thing. Image from Foremost Fitness

The Apple Watch also has a Workout for it!

After my leg injury I was advised not to lift any heavy weights while standing, or put strain on the muscle in my shin. Not only was I pleased that there is a hand cycling machine in my gym, but the Apple Watch actually has “Hand Cycling” under the “Other” category ? pic.twitter.com/GNrzyOYBWf

The above tweet doesn’t show the actual Hand Cycling icon because I edited after I did my workout, but there actually is one that resembles someone on the machine!

I found out just yesterday that I could actually use the seated cycle machine without any pain. The machine seemed to use more of my hamstrings and glutes due to my injury. I was really pleased with that though. But yeah – no lifting heavy ass weights from the floor, so no deadlifts. Bummer. 😐

The injury has been drawing a lot of attention, since I walk around outside limping, and when I end up limping on a bus when I have to travel somewhere, or even going to the shops in my local area.

I hope my leg recovers fully though. There is still a sizeable lump on my shin, which still hurts to touch. And there are some scabs where the edge of the step scratched me deep. I’m an idiot and I do pick my scabs sometimes. I wasn’t helping it. 🙄 But because of the pain I actually haven’t been able to wear pants or jeans. I don’t have pants that are not tight – they all touch the skin and it’s painful. It’s been all skirts for me, and at the gym I wear my only pair of booty shorts because all my leggings are full length or cover the injured area.

Doesn’t help that it’s getting into winter now. 😅

Thank you for reading! 💕 Don’t forget to leave me any questions in the comments so I can answer them in my next Hey Girlfriend! post.

Omg, I’m the same. I prefer to keep most of my goals to myself. I always feel like when I publish my goals I then have to be held accountable and I am way too exhausted for all of that. Ack XD

Can’t wait to see your new design! I saw your sneak peek and it looks really good, so far. Gonna be really amazing 🙏

I hope your leg heals quickly. I saw it on your insta story – so glad you didn’t break anything! Also, hand cycling?! Wow, I swear I see something new everyday, haha. Let me think of some questions and get back to you 😊

Your poor leg! I know the feeling. I hurt my back once falling down the stairs. >_> Never has been quite the same. Hope your leg heals up though!

Hmmm…as for a question: how do you manage stress, and find relief from it?

I am sending love! I hope you are recovering okay! And Happy Birthday for this month! I really want to revamp my blog and it’s style too I have been working on a new banner :)

I enjoy posting goals on my blog, but I do find that I set my sights too high a lot of the time, or just forget that I’ve ever made them because they’re on my blog and not in my diary/phone or anything. I think anything that’s really important to you you’ll work on anyway, so you don’t need to blog about the goal to make it happen. Looking forward to reading about your 27 in 27 anyway, it’s always nice to hear what you’ve been up to! I think on my 24 by 24 goals I only managed about 6, but that’s still something!

Sorry to hear about your leg injury and hope it’s a lot better now. I never knew hand cycling existed, so at least you’re able to do that instead. I know how much you love the gym though, so hopefully you didn’t/don’t have to go too long without your usual workouts!