Where did the sun go? 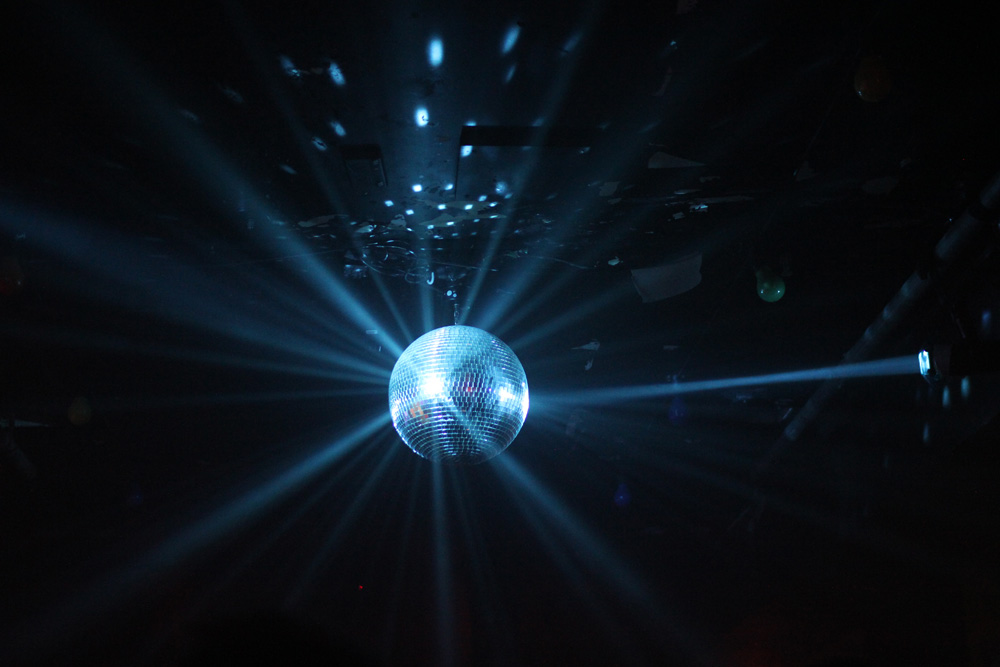 I had a pretty good weekend. On Saturday I went running for a bit (I ran to Tristan’s for fun, then we walked ten kilometres or thereabouts). Did the regular household chores then Tristan picked me up as we were seeing Hey Geronimo that night. It was really nice of Pete to put us on the door list!

Because trackwork was ridiculous then, it took us two hours to get into the city. We had to catch a bus from our home train station, to Olympic Park station. For some reason the bus driver took a rather strange detour, and he seemed to go to the mid-northern suburbs before heading south again. Strange, it would have been quicker for him to take us straight to the city.

When we got to Olympic Park station, it looked like there was a rather long wait for the trains, and they all seemed to stop at every train station.

Before the train pulled in, the announcer said, “the next train to the city will be arriving in approximately thirty seconds”. Because I doubted this, I started to count down from thirty, and sure enough, a train started pulling up. It took about thirty-two seconds for the train to finally stop, but I think I was counting pretty fast anyway. I was rather impressed and I said, “that guy rocks. I like him. He’s my new friend. He should get a promotion.”

Tristan didn’t seem too impressed; he thought his estimate last week for the train stopping in fifteen seconds was more accurate. I suppose it was. :P

Once we finally arrived in the city we realised we were really drowsy and Tristan suggested a coffee to wake us up, particularly because I was also convincing him to dance with me to Hey Geronimo and he kept refusing (boo). On the way we passed Poff and bought twelve macarons, because Tristan hadn’t tried any before.

We went to Starbucks and because I don’t usually like coffee unless it’s freeze-dried Nescafé (haha, I sound a bit like a jerk), I had a soy green tea latte. It was really quite nice. It was also the first time I have ever drunk anything from Starbucks. Back in high school I used to accompany my friend Michelle to Starbucks every Saturday because we were early to tutoring, but I never ordered anything.

After we downed all our macarons (including the not-so-awesome banana one), we walked to the venue where Hey Geronimo were playing. As soon as I walked in I looked for the guys in the band and introduced them to Tristan. It was so lovely to see them all again.

A duo named Brave were playing — I recognised them and their music from when they played at our university (which is where I met Tristan, heh).

I spotted a photographer I had seen at a gig a few weeks prior, and I tried to avoid him because I didn’t want to make conversation. Last time he also kept asking me if I wanted earplugs and I refused because I wanted to listen to and watch Jeremy Neale in all his ear-buzzing glory.

Sure enough, as I was putting my lens hood on my camera, the guy walked up to me and immediately said that I shouldn’t change my lens because the smoke and dust would get to it. Initially I was confused, but I was also taken aback by his abruptness. I wasn’t even changing my lens, which is why I was puzzled. I began to get annoyed at his remarks and mouthed to Tristan, “help me”. I wasn’t too fond of the photographer’s attitude — he complained about only being able to shoot for three songs, and that he wasn’t able to work with prime lenses.

My argument (which I didn’t want to put forward because I didn’t feel like arguing) was that he should be able to work with prime lenses if he is a good photographer — prime lenses (meaning you cannot zoom) generally produce better quality images, and even though it is a challenge to move in and out to compose a photograph how you want, especially with concert photography, developing that skill could be beneficial. Not to mention, his complaint about only having three songs to shoot was getting on my nerves. Most of the time you are only allowed to shoot the first three songs a band plays, out of respect for the musicians and because most venues have that rule in place. It is annoying to have photographers taking photos throughout an entire concert. I have seen this guy’s photos and he could do with a bit of improvement. I don’t mean to scorn him, but I didn’t like his know-it-all attitude towards me, nor his attitude towards concert photography in general — which was, in my opinion, rather amateur.

Most of us know that you don’t need good equipment to be a good photographer, which is why his first question, “what lens do you have?” bothered me greatly.

I guess little things bother you when you love the band that much, it’s more about the music than anything else… 🙄

Naturally, Hey Geronimo were marvellous, and I was so happy to be able to see them perform again, this time with a friend. :D I think Tristan probably thought I was nuts doing my whole headbanging-boogie-dance-thing and shaking my hair around wildly, but I couldn’t help it. Blasting with their new song Lazer Gun Show (the only time I will forgive a band for a spelling error, haha), and finishing as usual with Why Don’t We Do Something, maybe I shed a couple of happy tears.

I’ve been a bit too lazy to update my photoblog recently, but here are a few shots. I’ve been trying to get Tristan to remember all the band members since he met them all, and he’s been doing a pretty good job (keeps getting Tony, the drummer, and Bill, the bassist, mixed up). /bounce 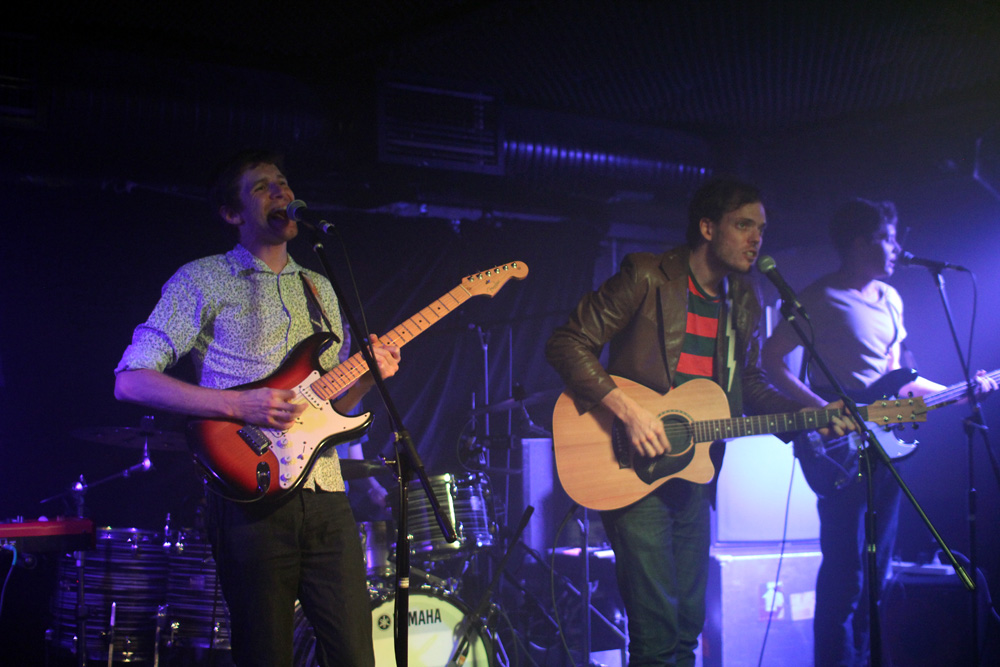 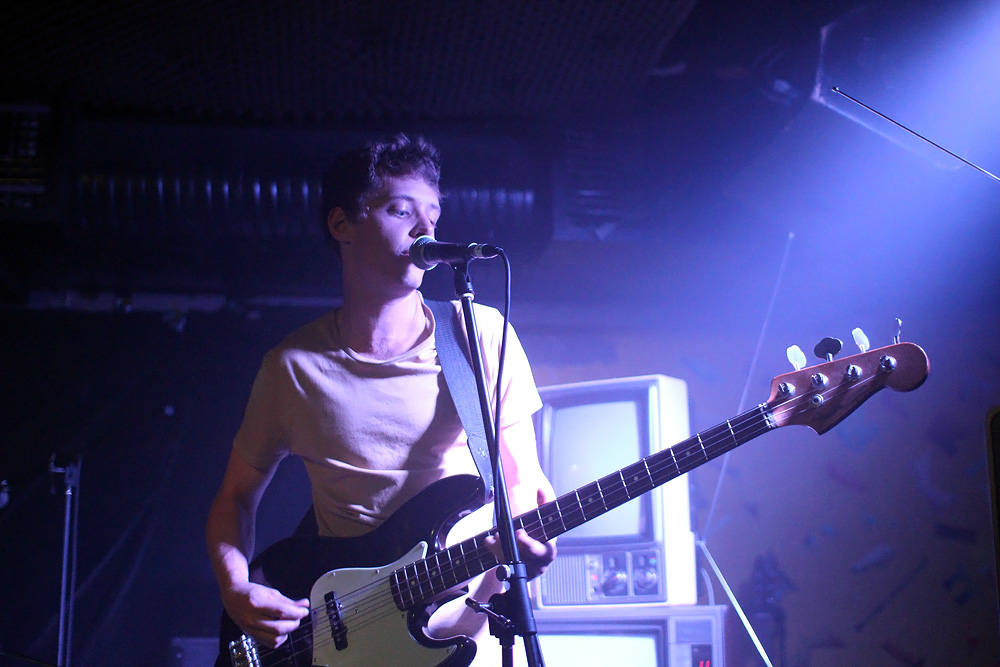 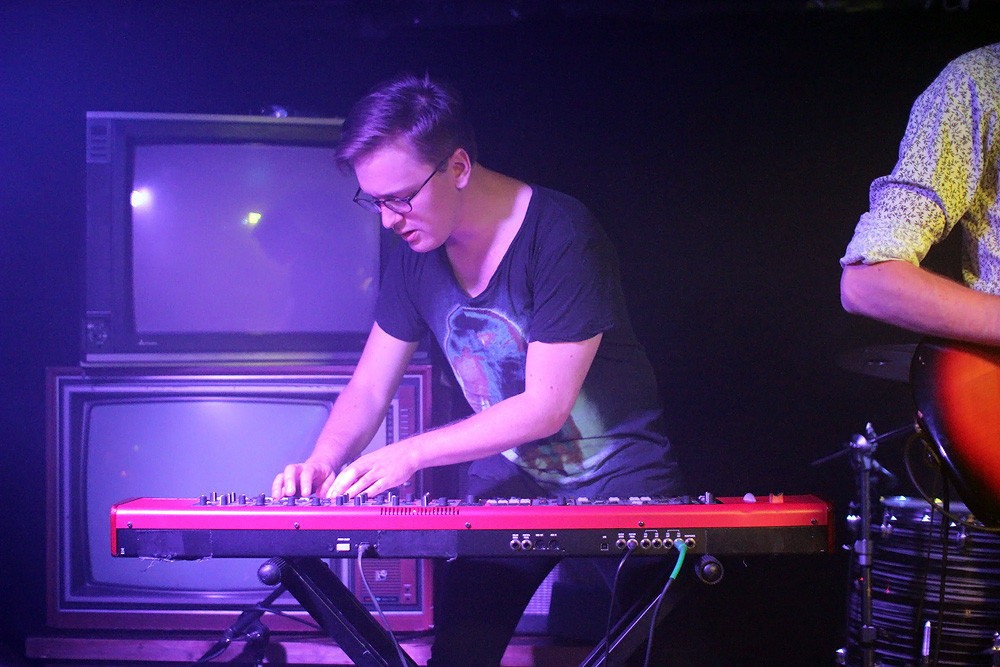 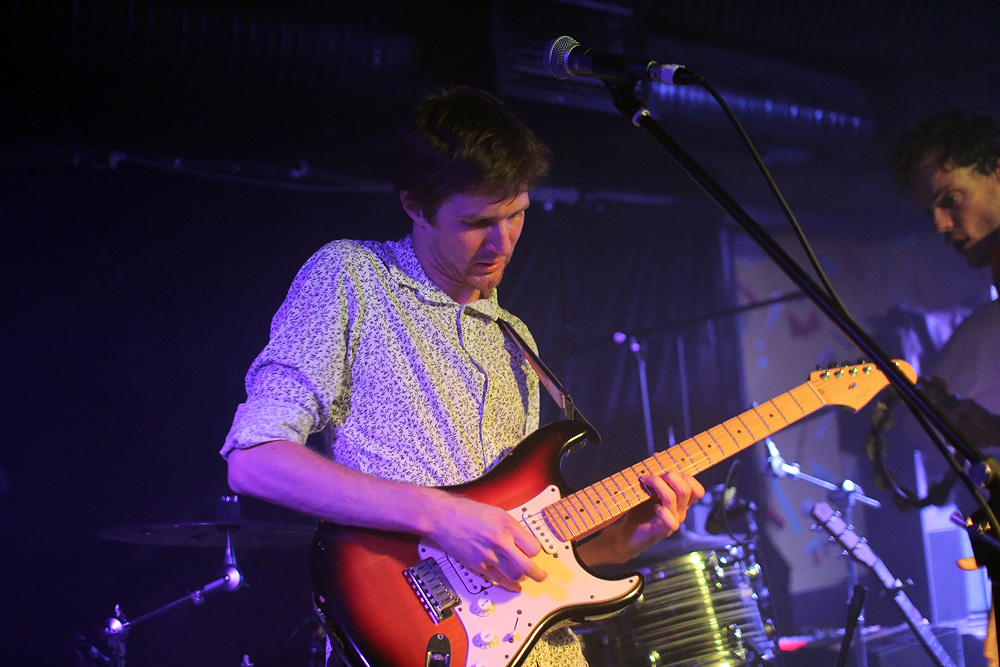 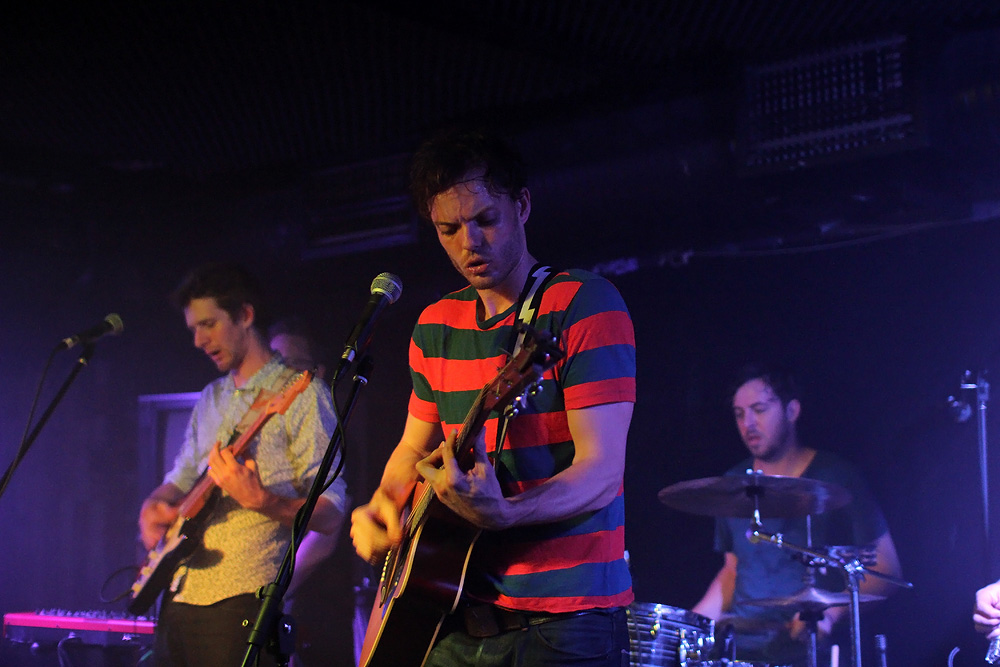 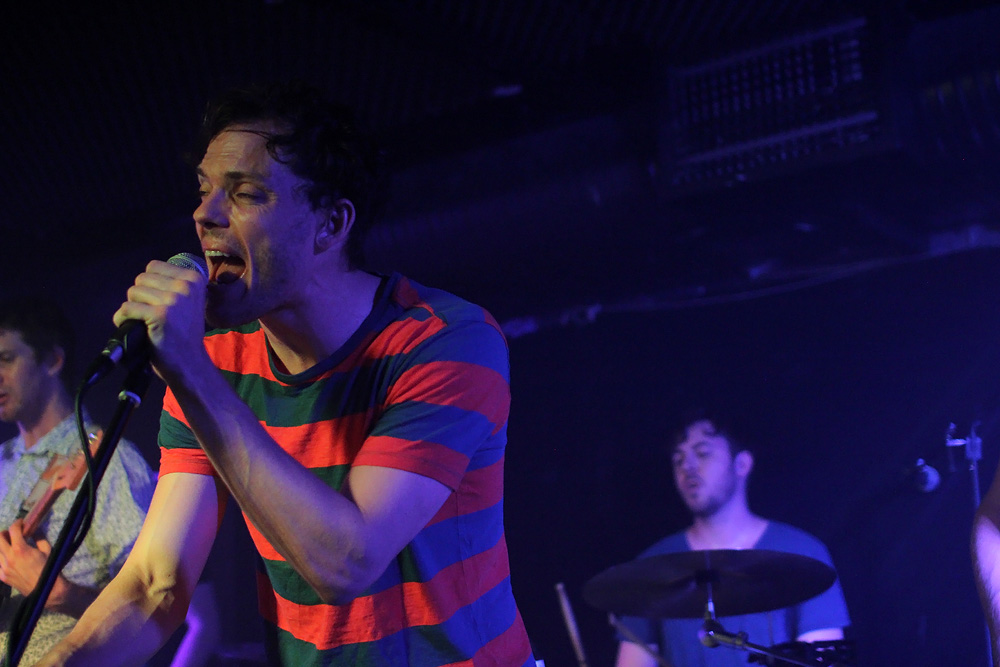 When I said goodbye to Ross at the end, I said, “I stole your setlist again!”

And so another weeks starts all over again, but work has been going well, I continue to buy bubble tea from the bubble tea place downstairs, and I keep trying to find ways to make Tristan smile more so I can see his new teeth. In a nutshell, he got two teeth put in to fill in the gaps between his existing ones.

That is so annoying with the other photographer. It seems like they don’t want to be doing it at all. Or maybe they are interested in you and trying to start a conversation haha. /wave

I wish that more people would do the headbanging-boogie thing! It makes gigs so much more fun! I still wish that I wasn’t so shy that time I went to see the Griswolds. (I wouldn’t have been so shy if there were at least one person dancing!)

By the way, the thumbnail my feed reader generated made the picture of the disco ball look like a fancy space photoshop, which I think is pretty cool. Disco balls are awesome.

People who have no clue what they’re doing, but act incredibly clued up and haughtily knowledgeable are among the worst types of people in the world. Being a concert photographer to me seems to be one of the most awesome jobs in the world, because it’s something you can really enjoy doing. What’s the point in earplugs?!!??!! /bash Really, congrats to you on not hitting him. haha

Also, the guy in the third photo of the band looks exactly like someone I know, hipster glasses and all. I had to stop, scroll back up and do a double take! Even now, after the fourth check, I’m still not quite sure…

I don’t know anything about photography, but the only guy shouldn’t have told you those things. Maybe he just wanted to look smarter. Anyways I am curious how his shoots turned out compared to yours.

It’s amazing that you know the guys from Hey geronimo. I’ve listened some of their songs and they are pretty good.

The guy’s photos are here. They aren’t that bad but they can be improved. I did have a lot more to share that will probably go on my photoblog later!

LOL some people think they are true photographers. Just because they have a fancy camera, all of a sudden they are pro … that’s what irks me about this hobby sometimes. I used to have a camera and I LOVED IT TO PIECES!! It was only a Nikon D70 but I knew it inside and out and could take amazing photos with it and didn’t have to spend such crazy money and time to take nice photos.

Of course, I had some people look at me funny with their high end Canons and expensive Nikons and laugh at me trying to take photos. Then one time I when I was showing a photo I took to my fiance, one of the guys saw it and said “wow .. that’s suprisingly pretty good!”. That just proves it’s the photographer not the camera or equipment that takes good photos.

That’s why I would be so freakin’ annoyed with that guy you encountered at the concert. OMG. I would SOOO ANNOYED!! Clearly he’s not quite there yet as a photographer if he’s complaining too much. If you have an issue, go fix it. Get better lenses, get another camera, get some lessons, shut your mouth and shoot!

I’m going crazy trying to find a photographer for my wedding right now too. How fitting that I saw your post on photography.

Absolutely agree — I have the same viewpoint! My friend recently picked up his friend’s DSLR to play with, and had very little experience taking photos with a camera, so most of his shots were out of focus or blurry. But I, as a photographer, could honestly say that his composition was really good. He really had an eye for fitting things in the frame in an eye-catching way, and he was great at composing portraits — something which I personally struggle with.

I have seen a few people use a professional camera and don’t know how to take good photos. A good photographer doesn’t need a good camera.

Small note: I like this font that I am typing in. :o I FOUND A FONT. /eee

Okay. Maybe I’ll remember to tell you in email now… 😳

Do you always steal their setlist? Is it just lying around on their stage or something? o.o 😏

Wow! That bus does have a strange detour. o.O I wonder why… Some of our buses are that weird too, in the attempt to cover as much of an area as possible, but that means they take ages to arrive to destination. >.<

Coffee… love it! And I really want to try out one of those Starbucks, too.. but I can’t seem to be able to find one in Rome. :(

That photographer sounds like a strange guy… Uhm, was he trying to seek some attention? I wonder if that was his first time shooting.

Well… these guys look awesome! :D I haven’t been at a live concert in years (mainly because it’s expensive), but when I see photos like these I miss that experience a bit.

P.S. The layout I made between last night and this morning is up now on Luana.me, but I feel it needs some more testing and tweaking. In any case… HTML5 made things a lot easier for me! XD