The wall of sticky notes 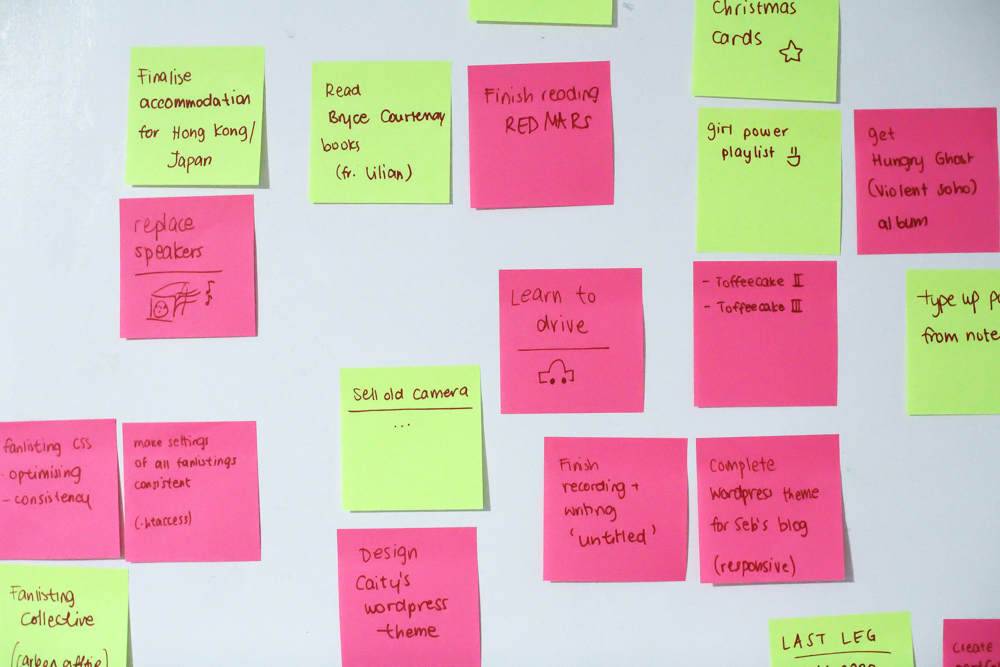 This isn’t another project. In fact, I have forbidden myself to call it as such, because I have started far too many projects in the past that have never finished. Of course, I should keep my options open, but after saying Project Simplify Georgie was the last project I would ever have (and it looks like I never kept it up, haha), I feel like I shouldn’t call things projects anymore.

Anyway, this started off as The Butcher Paper Project, a project in which I envisaged myself filling up a huge piece of butcher paper (just imagine a huge wall-sized piece of paper, really) with things I wanted to do. Like a bucket list, if you will.

However, this goes against a few things I have told myself in the past:

But you know what? Sometimes you have to go back to your roots. Sometimes you have to go back to what you were familiar with, what you used to know, because you can’t forget that it brought you here today. I was the girl obsessed with to-do lists, the girl who wanted everything she could get out of life, and wanted to do everything and anything. And regardless of how I set out to do those things, I am still that person. I picked myself right back up again after I lost my job, the kind comments of my readers were so touching, and I kept on walking as if I had never fallen down.

In 2009, I bought a packet of sticky/post-it notes. I was always against using them because they were very pricey for pieces of paper with fancy adhesive. At $5 a pop, I refused to use these bright pink and yellow ones until I opened the packet a month ago. Last week, I started writing on them. I wrote positive notes, and then I wrote things I wanted to do. It had always been in my head — that once I finish my master’s degree, I would party and have fun and get some things done. 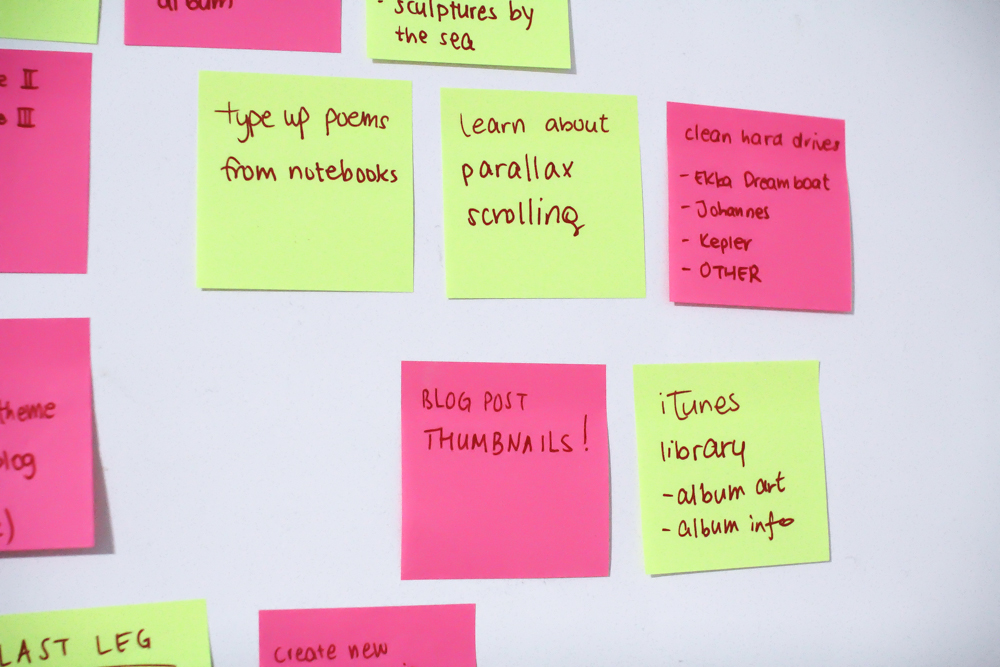 So I stuck them on my wall. Things like going ice skating, learning how to drive, doing some design commissions, cleaning my blog, redesigning my portfolio, reading books, buying a present for Brandon’s birthday, getting a haircut, making Christmas cards, cleaning my room, buying some music, and so on.

Without even realising, or intending to, I finished a few of them.

My idea was to destroy the post-its, but Brandon said, “But don’t you want to see your progress?”

As a simple, short, matter-of-fact comment from my younger brother — someone who I always fought with as a kid, argued with, but had many good times with, yet someone I rarely got to see because I got home so late at night from work and he disappeared off to school in the mornings — it made me feel happy inside, that he gave attention to what I was doing, and appreciated the idea and gave me some moral support. On Sunday evening he was poking me and shaking me in my chair to do my university work, perhaps a little keen that we would both be finished with our respective chapters of study, he having his last HSC exam on Monday.

I also had my university Masters presentation, which I didn’t speak much in, out of shyness, but that was okay as it was a group project. But it was my last class ever — I only need to write a 2,000 word reflection now, but that shouldn’t be too bad at all.

When I finished a task on a post-it note, I moved it to a space at the side of the wall. 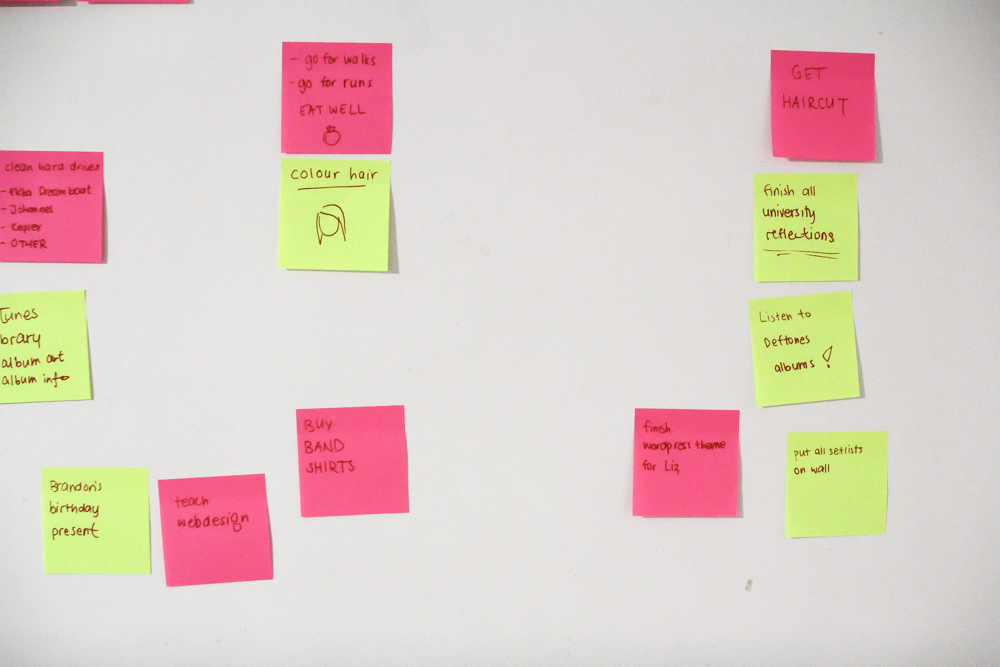 I got a haircut yesterday. Not much of a chop, but enough to refine my layers. Then I went to the jewellery store and I bought some rings. I went home and made a great dinner with salmon. I slept early, and woke up feeling great. 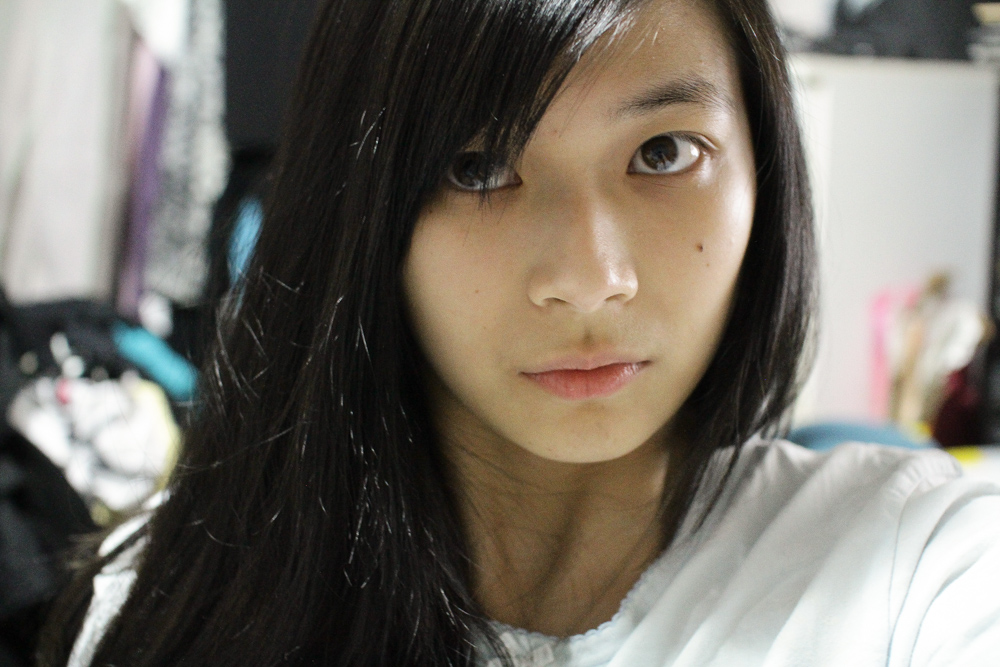 I got my Instagram prints from Origrami earlier in the week, too. 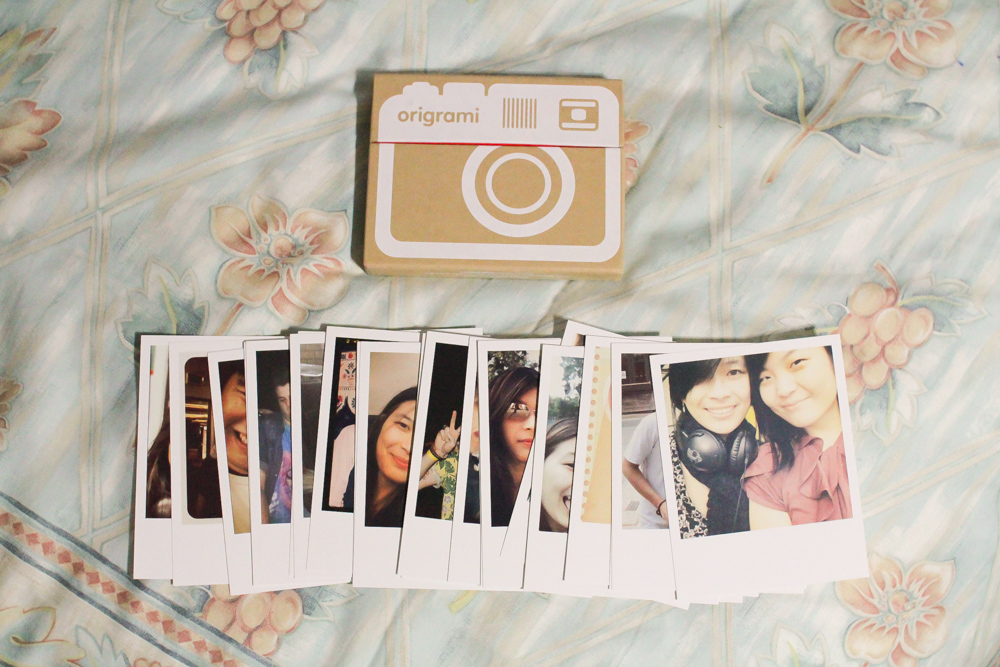 Not having a job for the time being is pretty swell. I don’t need money. I’ve got enough to get me by. Everyone knows money doesn’t buy happiness.

I could teach you a thing or two about parallax scrolling! :3

And practically anything else computer-related, I’ll work together with you on! I have plenty of things that I need to get done too. Unfortunately I don’t really have a wall to put sticky notes on, so I’ll be using Reminders on my Mac and iPhone instead. I have some miscellaneous tasks that I’ve been meaning to do all year which I ought to get around to, so you’re not alone. In fact, now that I’m commenting, I think I’ll blog tonight as well, so you and I will have written something tonight! Yay jie! :D

Glad to see you’ve already got a jump start on your tasks! I’m sure you’ll get many of these done in no time :)

Congrats on picking yourself up and going again. You deserve this break, and I hope you’ll get to make the best of it ♥

*pokes projects in the eye*

This post-it, thingy is such a great idea, and I hope it will continue to be a great inspiration for you, I think it’s fantastic. Personally I have to keep todo lists written or I forget things. O_O

That is really cool that you and your brother both finish at kind of the same time. Maybe there can be some kind of celebration? :D

Your hair looks all the pretties.

OMG those instagram prints. THAT IS SO AWESOME, ARRRH. Now I just have to have some done too. xD ♥

I thought that you had stopped updating Project Simplify Georgie because you had so much success simplifying your life! And your wall of sticky notes looks pretty!

I didn’t realize that you were on the cusp of finishing your master’s degree so soon! Man, time has flown! Or, like you, I’ve been so busy that I haven’t noticed. Go write those reflections and kick that degree’s butt!

In a way you could say I did simplify my life so much there was not much to write! So you thought correct. I mean, what better to simplify even further by nuking the project that got me there in the first place? :P

I just read your previous entry. I’m sorry to hear about your job :( I would be really annoyed if I were let go without a reason. I’m glad you’re doing well after that though. I wish you the best in whatever you do next!

I really like your sticky note idea! It’s like a very decorative to-do list, and I imagine it feels good to take it down and move it once you’re done with a task. Even though I have to-do apps, it’s still nice to write it down and physically cross it off :)

So true that money doesn’t buy happiness. I’m so sorry about you losing your job. That really sucks. I love your post-it idea so much. I have an app where I make lists but I think having it all on a wall with post-its would be so freeing and also just easier to visualize. Your haircut is cute!

Your post-it note wall is awesome. I want to do one now, but my wall is covered with magazine cutouts. Whoops.

I just read the previous post and I know everyone else has already said this but ugh, you fabulous, amazing, strong girl for how you reacted. You’re so wonderfully brave. It’s their loss, anyway — you can move on to better places! ♥ You’d be great at music journalism.

I really admire how you’re making the best of your situation and continuing on, not letting it faze you. I also like your sticky note planner; in the past I have done similar things, I eventually just trashed them altogether. :X Anyway, I, too, believe they’re much too expensive for what they are, but I do find them useful. :p

Using Post-its is a great idea, I had bought a lot of post-its last year for making notes while studying and all, and it actually did help me….. but your idea of creating a wall of notes is way more better!

I’m so sorry about you losing your job…! But I’m sure you’ll get better opportunities now…!