Hi! Hey! 😀 So, again, it’s been some time since I published a post, and I’m trying something new (again). I’m in Seattle now, for the weekend, before Nick and I drive down to Portland (Oregon) and I go to XOXO festival (again), and then we have a little break in LA before going home. As you might know, I tried at the beginning of this year to commit to two blog posts per week, publishing on Tuesdays and Fridays, and then tried to publish three times a week in August – but sometimes unexpected things happen. For me this was a break from social media and unintentionally from my blog, falling behind on a lot of things I “promised” to write about, being busy at work (good-busy, though) and eventually losing motivation.

But it all happens to the better of us! So I thought, sitting here in our apartment that we booked through Airbnb, drinking a really nice mug of double bergamot earl grey tea (!!), trying to adjust to Pacific Daylight Time, why not write a blog post about what we’ve experienced in Seattle this afternoon, and just write about it on my blog so soon after the fact? While I have an opportunity?

I know I haven’t finished all my blog posts about our Europe trip this year, but to be honest, they feel largely demotivating now, because I more or less left them to rot. And they feel a lot like “old news”, heh. I have every intention of coming back to them, and I’ve edited all my photos from the trip, but they’re going to be on the back burner for a little bit longer. Somehow, delaying certain blog posts feels like I’m delaying the rest of my life, so I feel like a “restart” is a more motivating option. Let’s start from zero again. And this blog post refers to “day 0” because our first “day” in Seattle was technically just an afternoon.

Anyway, enough ramble from me. Let’s talk about…

The Friday that never ends

Also known as: travelling from Australia to the United States means that you will experience the same day twice even though it takes 13+ hours to get there. I still cannot wrap my head around this. Our flight departed on Friday morning after we woke up and started our day at 5:00am, we were on that flight for 13 hours, and we arrived in Los Angeles to transfer flights but it was 6:00am that same Friday morning. 🤣 If you want to experience time travel for yourself, do that. (Travelling from the United States to Australia means you lose an entire day – so there’s another option.)

I managed to get maybe three solid and intermittent hours of sleep on that flight, and napped on our two-hour flight from Los Angeles to Seattle. I got enough rest with my eyes closed that I didn’t seem to need that much coffee to get me through the rest of the actual day. I had a black coffee on the flight at some point, then drank a mocha while we were waiting in the lounge during our layover in LA, and then had a coffee post-lunch after arriving in Seattle. Three coffees in 25 hours while running on three hours of sleep on a half-day flight? Seems legit. ☕

The thing I disliked the most about the longer flight to LA was that my left leg really fucking hated it. My knee was in so much pain for a long time because it wasn’t getting the right blood flow and was basically in a bent position the entire time. Even when I took breaks to walk, it still took some time before the pain went away. Another thing that is pretty annoying about long-haul flights is just how lethargic and hungry you get because your body is supposedly working harder to keep you breathing and adapting to the air pressure in the plane’s cabin. I always plan to do something like refuse the food and just fast, but I always end up getting really hungry.

After arriving in Seattle we picked up our bags (I packed so light that I fit an umbrella in, and still had space!) and caught a shuttle bus to the car rental place, and we rented a car! We could pick any car we wanted but most of them were the same… nothing fancy like we were hoping for, haha. I’m not a terribly confident driver, especially not with driving on the opposite side of the road and with the steering wheel on the opposite side too – so Nick does all that. 😛 Generally he hates being the passenger and loves driving, and I love being the passenger and don’t mind driving, so it works out for everyone. 😎

As we were quite hungry we stopped by a shopping centre for lunch. I grabbed a sushi burrito, which really just felt like a big sushi roll (slightly disappointed), and Nick got orange chicken at Panda Express. In Australia we don’t do orange chicken – we do lemon chicken. To kill some time we visited the Museum of Flight, since we couldn’t check into our apartment until 4:00pm.

They had a special Moon exhibition on, that was open only until Monday, so we paid extra to see it. I’m also not really into aviation but I do like transport systems and seeing the history and evolution of transport, so I found the museum really interesting even though I didn’t read every single plaque that was in the museum. But then again, who does?

There was a whole area dedicated to showing some real planes from history, and their interiors, that you could walk around inside and have a look at too.

Getting into our apartment was a bit annoying because I was initially trying to open the wrong lockbox for the key. D’oh. Nick had to drive around while I retrieved the remote control to open the gate to the parking spaces. I also took the stairs because the elevator had some rather confusing buttons… But we figured it out eventually, haha.

I couldn’t stand plane germs and I felt positively gross, so I took a shower and cleaned my teeth thoroughly before we decided to get a quick spot of dinner. My friend Kyle gave us a handful of great recommendations that are near where we’re staying, but we weren’t up for dining in a restaurant and wanted some simple fast food. We went to Dick’s, a famous burger joint that’s been around for decades and hasn’t changed since. Good, traditional burgers. 🍔 We decided to pass an ice cream place on the way back to our apartment. I really wanted to get ice cream but the line was really long and we wanted to eat the burgers at our apartment (and we worried they were getting cold). Oh well, we can definitely get it another time. 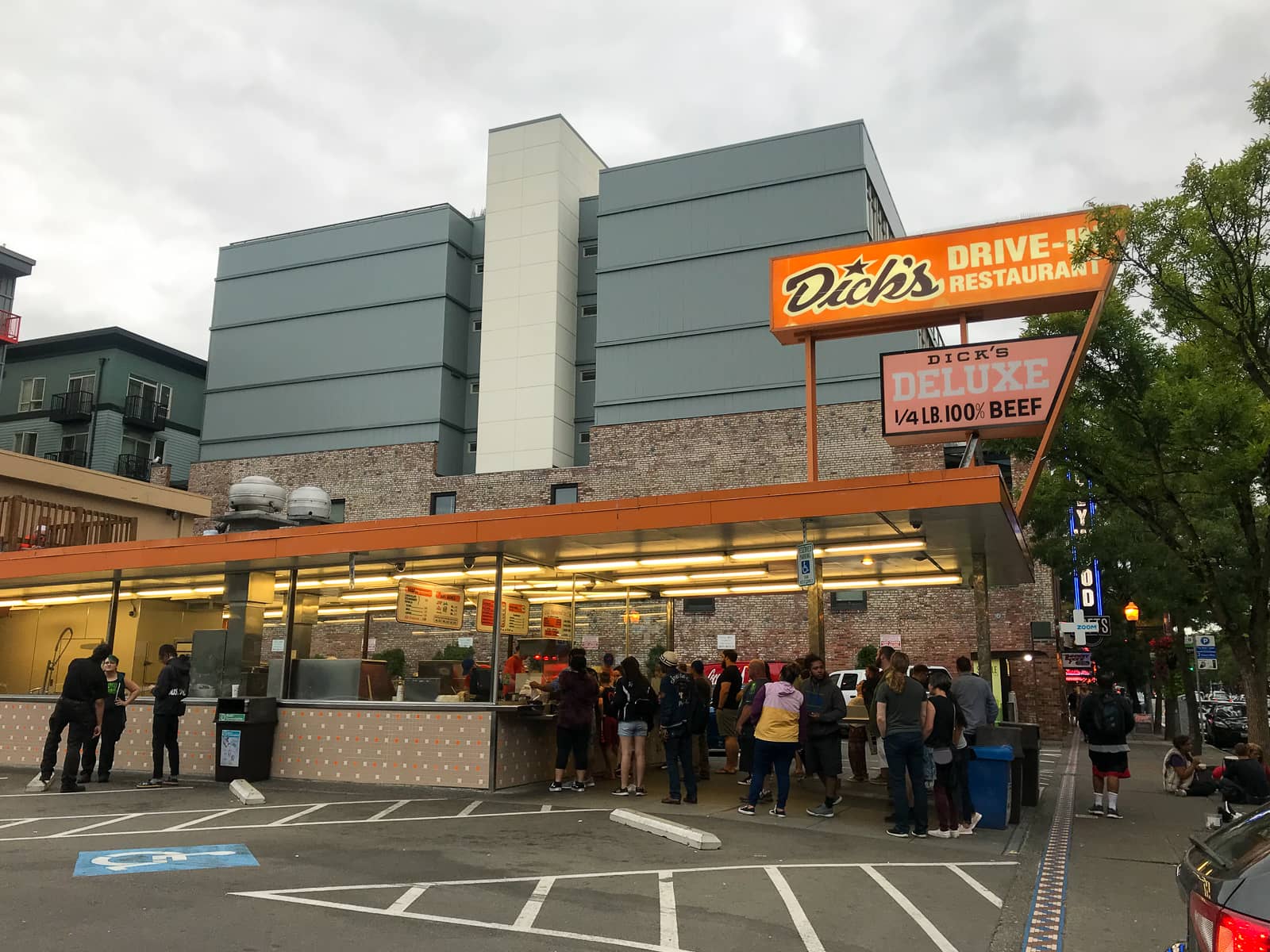 The burgers were really good. To be honest, the taste was like a Big Mac from McDonald’s but like, a lot better. It was just a really good simple burger with nothing fancy. The fries were also really tasty, and you could tell from the texture where and how the potatoes were originally cut.

And so that was more or less our day zero in Seattle 😊 You can follow #cookesUS19 on Twitter to keep up to date with our adventures, or better yet, follow me on Instagram and watch my Story for some more frequent updates.

Sounds like you had a good first ‘day!’ The burger and fries look super yummy.