I was in Portland in early September for XOXO. Post-XOXO was really difficult; I already wrote about the incredible experience. I had spent four days around people, but namely around a few people whom I grew to love and adore. I was pretty much glued to them. The night of XOXO, even the day after, was fucking brutal; it was like someone had ripped my friends away from me.

The best way I can explain it is that being alone and being in your own company is something you are used to in the day-to-day. The steps taken to be alone are often gradual, the experience being preceded by farewells and actions you very well anticipated. But experiencing XOXO was an incredible high, followed by its end: my new friends leaving, and me being with no company at all. Rather than it feeling like time to recuperate, it felt like loneliness.

It was very hard. I cried. I was supposed to work remotely the next day but I was really miserable. I kept bursting into tears. I let myself cry and told myself to get over it, but fuck. No can do. I don’t think it helped that I was cooped up in my hotel room. I finally managed to dry my eyes and pick up the package that was waiting for me at reception from several days before (I bought an electric blue Apple Watch band that was no longer available in Australia). I had a chat with one of the staff members at reception who had been really welcoming from day one when I arrived. He asked how XOXO was and I told him about it, and I also said I was struggling to stay positive because I missed my friends.

“Think about it this way, you might be apart now, but you know that next time you’re in their town you’ll always be welcome to crash on their couch.”

I’d never thought about that.

I took my laptops to a café nearby and forced myself to eat some bacon and eggs on toast. The light in the café made me feel a little better. I managed to do some work for some time.

In the afternoon the lovely Liene picked me up and we went to the Portland Japanese Garden together. She was a member so was able to get me in as a guest. I hadn’t met Liene before but I asked in the XOXO Slack group if anyone was headed to the gardens and she was willing to go with me! ☺️ Honestly – seeing some nature was what I needed. I needed to breathe in some real air. We also had time for matcha and some sweets. 🍵 I’ll share some photos of the garden in a future blog post!

That evening I still felt miserable, I had a little cry again. That day had been hard. Part of me wanted to go home, part of me wanted to rewind and go back and experience XOXO again, but when I thought of the latter I just cried even harder.

I had been doing some research and asking around about how to visit Multnomah Falls. Something in me desperately wanted to do another hiking trail or see nature. Something, anything. Anything that would kind of keep me busy. That’s the thing with loneliness – staying busy is its worst enemy.

Cool, I’m going on an adventure by myself.

Whatever, I was gonna do it.

Something in me was afraid about it. I’m not sure why.

I slept alright. I got dressed and headed out, a little scared. The fact that I was doing things alone, so far from home, hit me again. I sat on the bus and planned a little bit. Although Multnomah Falls was the first stop, I decided I’d go to Cascade Locks first and then come back to Multnomah Falls. The Bridge of the Gods is at Cascade Locks and I definitely wanted to see that. There was a stop called Hood River which was the furthest point the coach bus went, but after a quick internet search, I wasn’t interested in anything there. I planned to get the next bus from Cascade Locks back towards Multnomah Falls, which would leave me a good hour to explore. Then after reaching Multnomah Falls I’d have about an hour to explore before I could get a bus back to the city, so I’d be back in time for lunch, and could get stuck into some work.

Deep breath – everything kinda went to plan, which was great!

Cascade Locks, the Bridge of Gods, and stepping into Washington state

Once I reached Cascade Locks (after feeling rather nervous inside and also getting as much juice for my phone as possible from the power outlet on the coach) I thought I should get something to eat because my stomach was empty. But my hunger for exploration was greater than my hunger for food. It took me about ten minutes to get my bearings and figure out how to cross the Bridge of Gods.

I actually didn’t realise until that morning that the Bridge of Gods crosses the border between Oregon and Washington State. I almost crapped my pants. I thought it was just a great view. Knowing it was on the border between two states made it all the more exciting and exhilarating, even as I was instructed by the toll booth staff to stay to one side and keep walking ahead. I looked down – big mistake – the gaps between the Bridge structure were relatively large and I feared dropping anything down there.

“Whatever, it’s just a bridge,” I told myself, even though in my heart it was me travelling alone, me adventuring alone, me fighting my emotional distress, me feeling lonely, me being independent, me going about things on my own – it was so much more than just a bridge.

The view was so breathtaking I almost hyperventilated. My anxiety and emotions bubbled up inside me as I pressed my tongue to the roof of my mouth and tried to focus on walking across the bridge steadily. You walk across the bridge in the opposite direction to cars, so that drivers can see you.

I found myself on the other side of the bridge, in Washington state. I wished I’d had enough time to walk a trail, but I was also unprepared and didn’t want to walk a trail by myself. Instead I climbed partway into what seemed like the beginning or end of a trail, and enjoyed my view of the Bridge of Gods from the Washington side.

Upon walking back the women patrolling the bridge traffic offered to take a photo of me with the gorge in the background. Yay! I was really thankful. 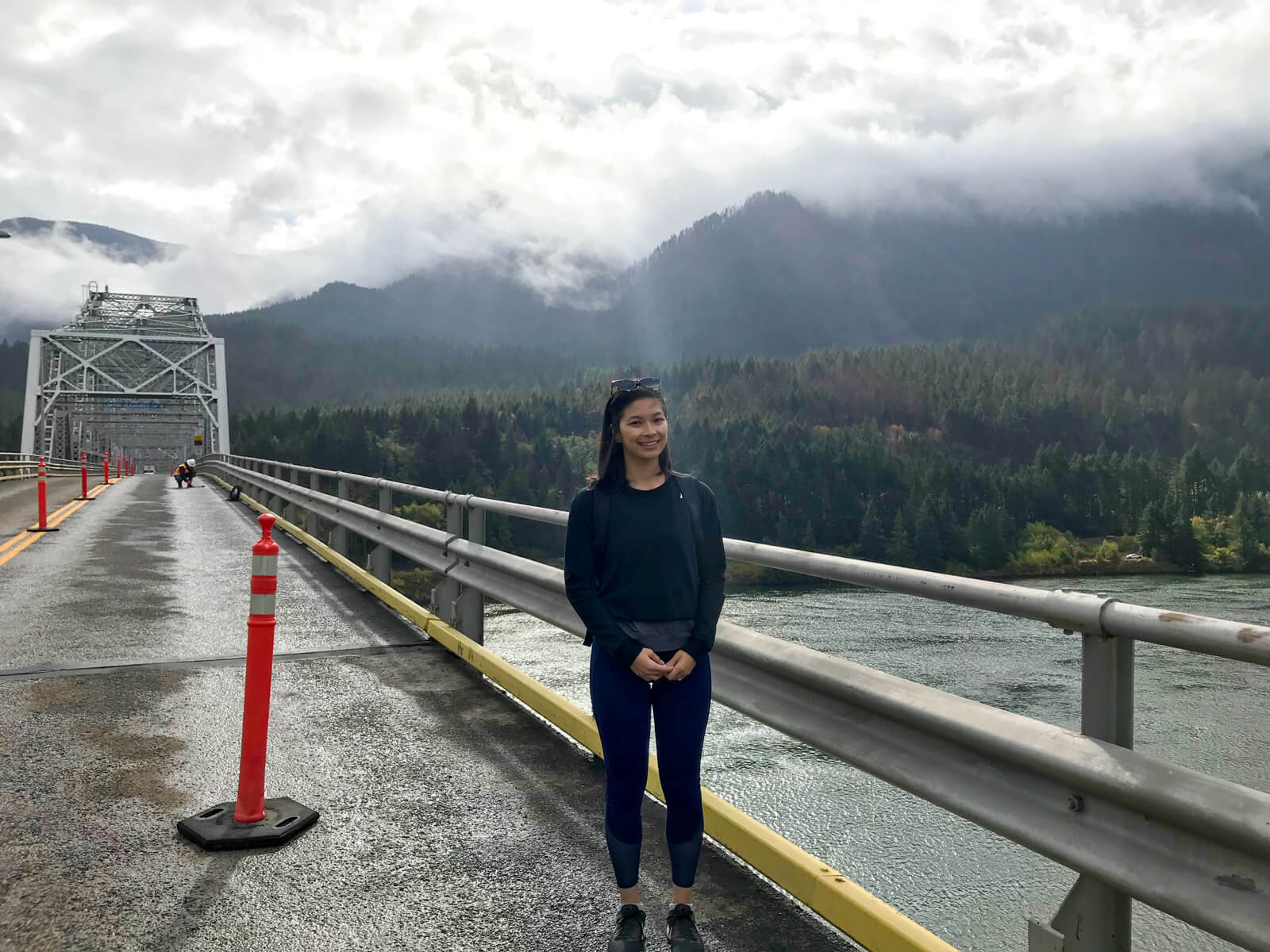 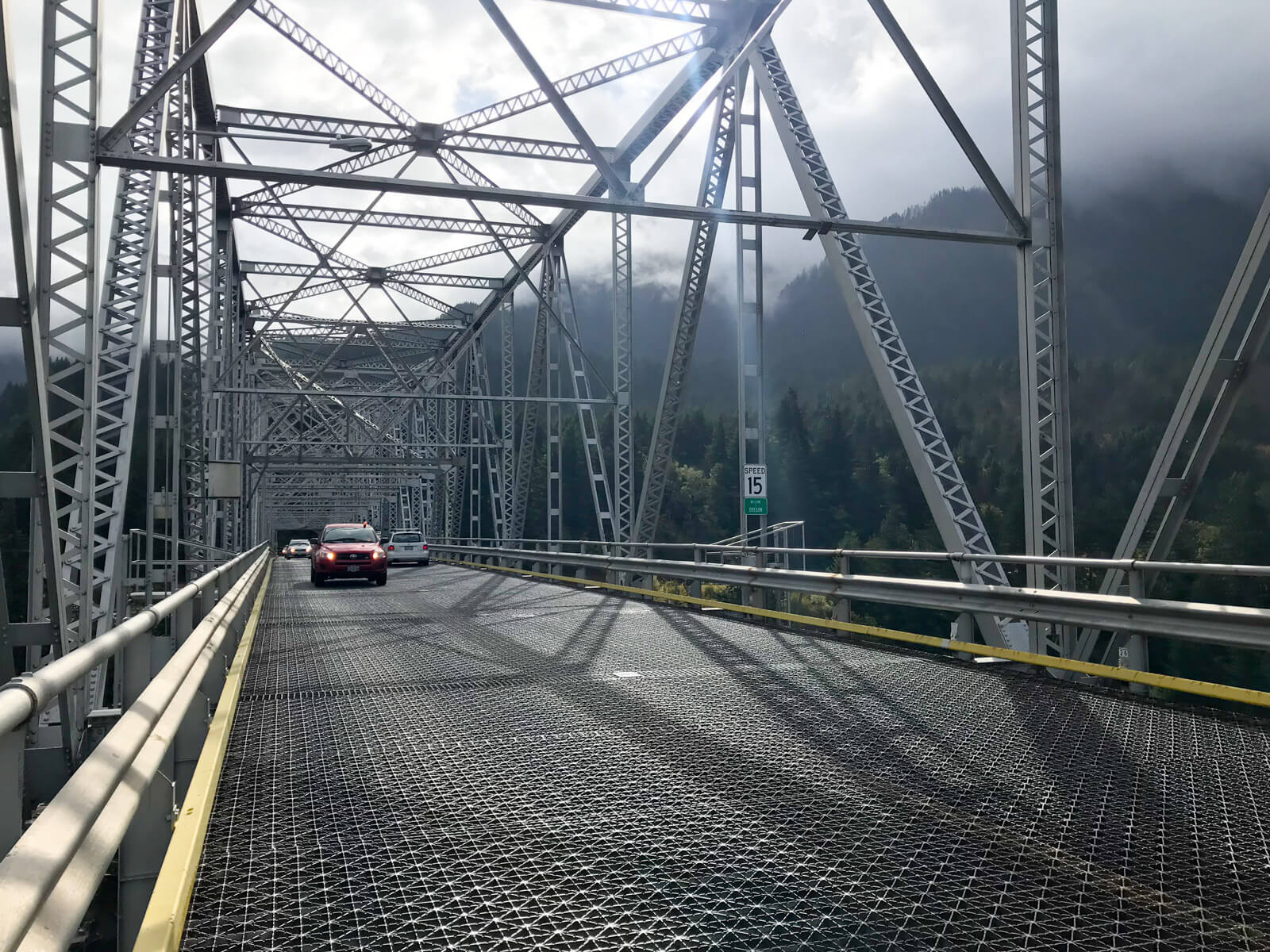 I had to run back to the bus stop because I was just a little short on time. Thankfully some folks were alighting the bus so I had an extra minute to reach the stop. I would not have wanted to be stuck at Cascade Locks for another hour. 😆 There was an inn with a place to eat, but I feel like I would have wasted my time.

The beauty of Multnomah Falls

The bus drove back to Multnomah Falls, the incredible waterfall that basically everyone recommended seeing. There were a lot of people there but not too much of a crowd, probably because it was a weekday morning. There unfortunately was not a lot to see there besides the waterfall itself; due to dangerous conditions and weather, some walkways beyond the waterfall were closed.

I spent a bit of time there just staring down into the bottom of the waterfall, watching the water hit the shiny coins that visitors had tossed down for good luck. I listened to myself breathe, as I mentally digested everything that had happened over the past four days, feeling incredibly grateful for the friends I had made and the amazing people I had met. And grateful for the opportunity to come to Portland and experience another country. I didn’t tear up, but you have absolutely no idea how much I wanted my new friends to be there.

Although there was a place to eat, I kind of just wanted to head on my way. I grabbed a chai latte upon arrival – I was feeling somewhat peckish but didn’t want to eat anything and felt like a warm drink.

Of course that wasn’t the best idea as I knew I would soon have to use the restroom, but I just decided I’d have to think smart about it and move as quickly as possible so I wouldn’t be stranded in the middle of “nowhere” without a restroom.

Well, actually, I found myself “nowhere” next.

I looked at my watch and realised that I could spend another 25 minutes doing not-very-much at Multnomah Falls, or I could catch another bus that would take me to Rooster Rock State Park, and I could have a look around.

I had to run for the bus and it almost left without me; I’m glad I dashed for it, because the experience I had at Rooster Rock State Park was so incredibly surreal.

Turns out Rooster Rock was named after a rock that looked like a phallus. Although I saw it come up in internet searches, I don’t think I could see it when I arrived. I got off the bus and immediately used the restroom next to the bus stop. It was dead quiet and although the bus driver didn’t leave immediately, I got a little terrified that there would be someone watching me while no one was around, and kidnap me or something. 😬 The entire parking lot was quiet and there was not another human in sight even though there were a few cars parked.

I walked around the open parking lot for a little bit but it didn’t look like there was much to see without me needing a car or venturing far away. The next bus back to Portland would be coming in half an hour, so I didn’t want to take the risk of going anywhere.

I followed a gravel path from the parking lot down to a rocky area and water. After doing an internet search on my phone, I realised it was supposed to be a nude beach. But there was no one there, and the weather was far too cold. It was the end of summer in the States, so I wondered when there would be people around.

Either way, it didn’t matter. I walked along the beach some, captured some photos on my phone of the view, and just stared out into the silence. I heard nothing except the sound of nature, but it was quiet enough.

I realised that apart from seeing some people in a boat in the distance, I was completely alone.

I felt so fucking alone, there was nobody there at all. No one. I was alone but I didn’t feel lonely. And somehow, that made all the difference. I felt a lump in my throat. But I didn’t burst into tears. I could breathe it out. I felt glad. I felt happy. And then even though I nostalgically looked back on the past few days, I finally felt the relief I needed. I thought about the experience that I had at XOXO, and I felt thankful. So thankful. I looked back on it fondly, without being overwhelmed with emotion.

And somehow, that was all I needed.

I’m sorry you felt so alone, but I’m glad you got through it! Somehow I think it feels best when you get through stuff on your own.

That waterfall is just beautiful! Honestly everything looked lovely.