2 minutes and 40 seconds with Coryl o’Reilly

My friend Coryl is a wonderful writer, but oh so much more than that. I personally find her very creative, witty, understanding and talented. From the early days of knowing her, I remember that she wrote on her website that her name was not an odd spelling, it was her real name. I remember her outgoing personality and the intelligent way she wrote.

Coryl blogs twice a week at CorylDork.org. I enjoyed giving her some questions pertaining to writing because I knew she would give some interesting answers. Here’s a biography and photo supplied by the girl herself! Also, the thumbnail image for this blog post is Coryl’s pet rabbit. 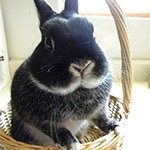 By day, I’m a Canadian writer and student studying for a double-major Bachelor of Arts in *inhales* Spanish Language, and English Literature & Creative Writing. By night, I’m the same, but with a sprinkling of artist. I’ve been described as a Renaissance woman due to my interest in the arts and the hard sciences. A co-worker said I was a Jack-of-all-trades because I can lay out a mean Excel spreadsheet. I call myself “housewife material” due to my love for cooking, cleaning, organising, budgeting, and design. If not for my strong opinions and outspoken nature, I likely would have been married off as soon as I became legal. Nothing makes me happier than lemon pastries, Jeremy Renner, music, astrophysics, and writing–especially all at once. I dream of being a novelist, but am currently working through poetry and short stories due to demand from peers and professors.

If you could have as many occupations as you wanted, what occupations would you love to have?

What is your favourite line from a movie?

“Words offer the means to meaning.” – V For vendetta

If I asked you to name a character who has medium-length orange hair, brown eyes, is relatively outgoing, likes scrapbooking and playing the trombone, and makes a fierce apple pie, what would his or her name be?

Imagine someone named Abigail. Describe what she would be like.

Abigail only wears a specific shade of purple, one that is slightly off of pure, reserved-for-royal violet. She lives with her grandfather and always says hello to strangers. She likes holding hands with her friends, and takes public transit to a large park every other Sunday morning. She doesn’t tell anyone why.

There is a teapot on your desk and something unexpected comes out of it when you pour from it into your mug. Is it green vegetable soup, maple syrup or tiny chocolate drops?

What one food would you feed to pandas if you had the chance?

Would you rather see alligators with rainbow-coloured teeth or giraffes with purple spots?

Would you rather have an extra eye or an extra ear?

An extra eye, but only if it works – my current ones are damaged!

Would you rather drink a cup of lemon juice or a cup of soy sauce?

A cup of lemon juice.

How many authors does it take to write a blog post that would make it on the front page of the news? What is the topic of the post?

Six. They’re discussing the influence of video games on literature. The blog post has been scribed, since they’re all playing Mario Kart and vocalising their theories.

What famous person would you dare to write a poem about, and share with him or her?

What skill do you have that is exceptionally weird?

I can screech like a pterodactyl, but it has a cool-down period of 24 hours. It’s a talent I can use only once a day.

Make up a word, and its definition, on the spot.

Last question: Write a rhyming couplet that has something to do with plastic bottles.

Twist off the cap until it’s loose.
Quench my thirst with sweet apple juice.

You can catch Coryl at: