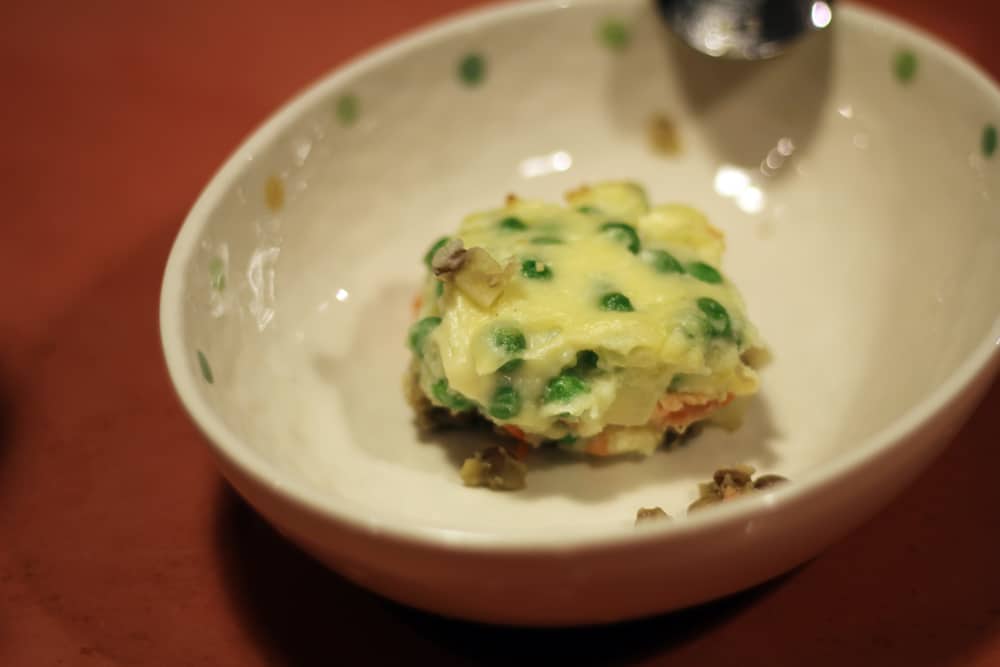 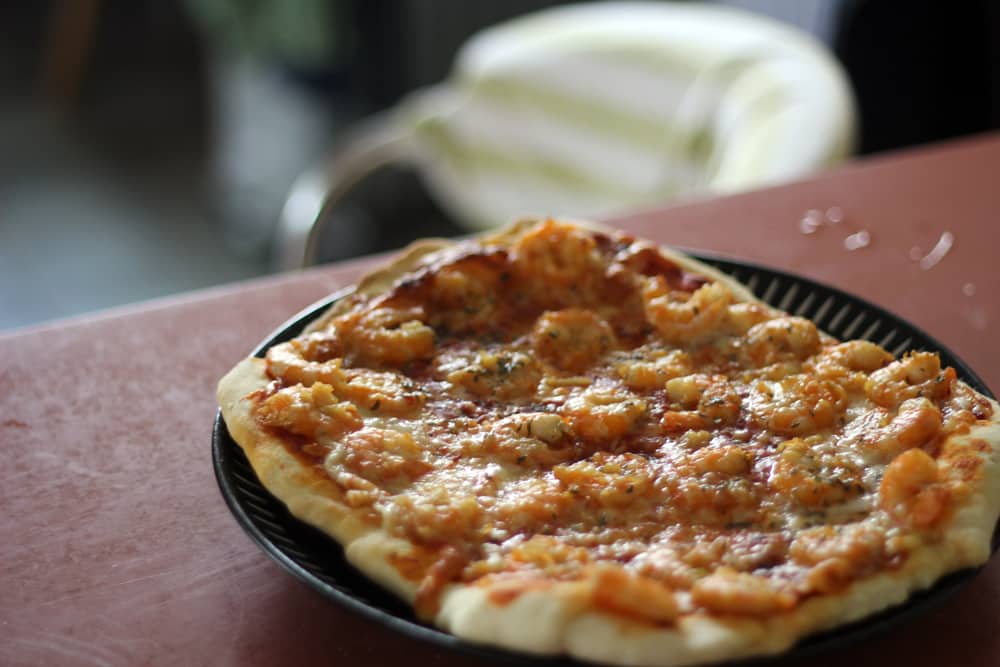 Over the weekend I went to James’s house and we cooked again. Last time our ravioli came out really crap. Yesterday we decided to make pizza and some kind of shepherd’s pie. In the morning, we went to the supermarket and bought supplies — some cheese, some salmon, some frozen peas, some ice cream, some prawns… just your regular ingredient shopping, nothing spectacular.

James and I don’t usually follow recipes. We sort of taste as we go along. This has happened since we made some really horrid tuna cake things last year (or was it the year before? I did vow never to speak of those again…), despite following the recipe to a T.

We decided to make garlic prawn pizza and bianca pizza. I am sad to say that the bianca pizza turned out pretty bad because we used slices of potato which didn’t cook all the way through. The rest of it, though, the mozzarella and ricotta cheese that we added, and the pizza sauce, was well done.

We made the pizzas from scratch. Last week it was fun rolling all the dough for our salmon buns, so this week I was quite used to rolling with the rolling pin. We began with the garlic prawn pizza. Peeling the prawns was kind of interesting, even though it’s a tedious and dull job. After cooking the prawns with some garlic (we had about half a kilogram of prawns and nearly a whole bulb of garlic), they were so delicious that we could not resist eating some before we put together the rest of the pizza. It turned out to be more of a rectangle/square than a circle but that was okay. Our base was just pizza sauce and cheese, and then we put the prawns on top.

Since we had some garlic “sauce” left, we spread that evenly in the gaps in the pizza. There were some prawns left, even after covering and spreading the surface of the pizza evenly, so we ate them. :P We garnished it with some rosemary. The pizza took about fifteen to twenty minutes to cook.

Oooh it was scrumptious. 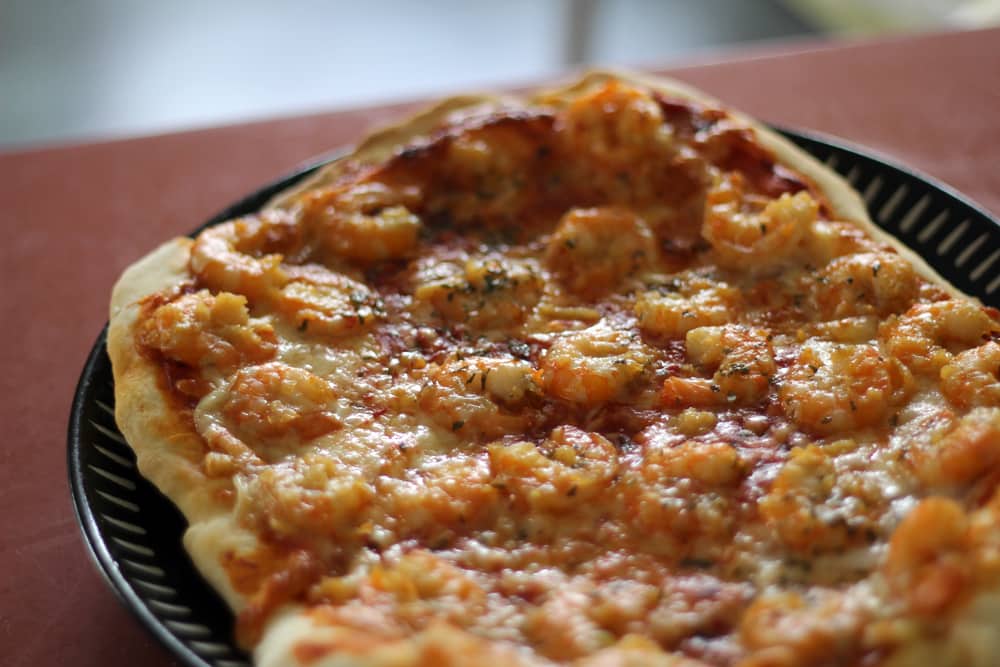 After watching the funny b-grade film Away We Go, we decided to make shepherd’s pie. Our idea of shepherd’s pie was really vague… so we decided to just call it vegetable pie, with some smoked salmon. It was my idea to bring along my red and green lentils, for I had them sitting in the cupboard for weeks and I hadn’t cooked them.

From bottom to top, our pie had the following layers: 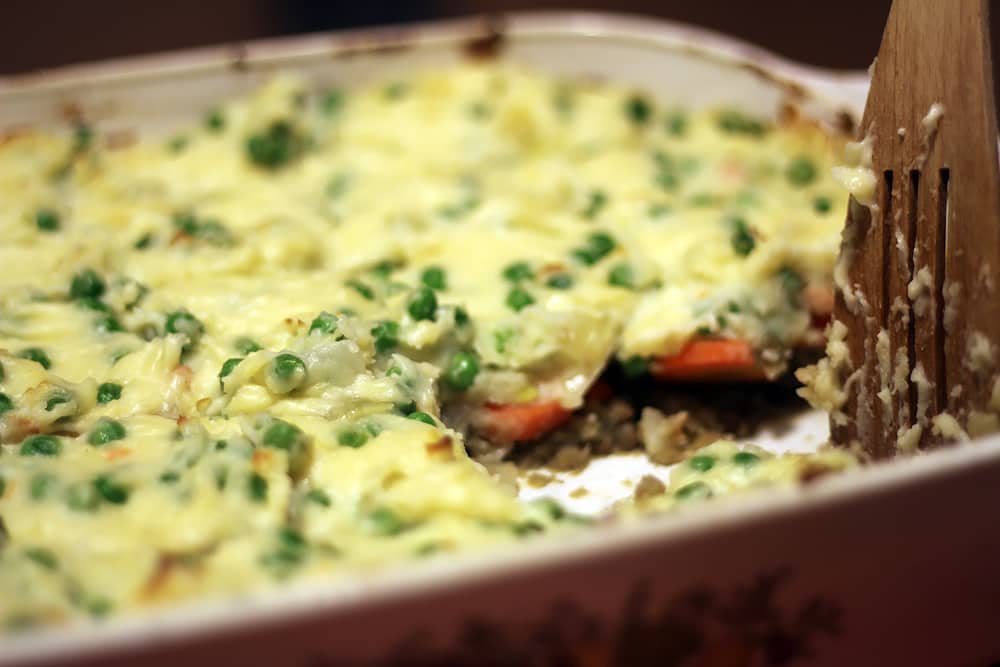 All the ingredients were half cooked before we layered the pie and put it in the oven. We boiled the lentils and the peas and the potato. It took about twenty minutes to fully cook by baking in the oven — we waited until the top was slightly brown. The pie was sort of falling apart when we cut it into pieces and served it. It wasn’t gross or anything, it just wasn’t firm because we didn’t have a lot of firm ingredients. It was, however, a success and made up for the fail bianca pizza.

If the look on James’s face doesn’t say this is yummy, well… 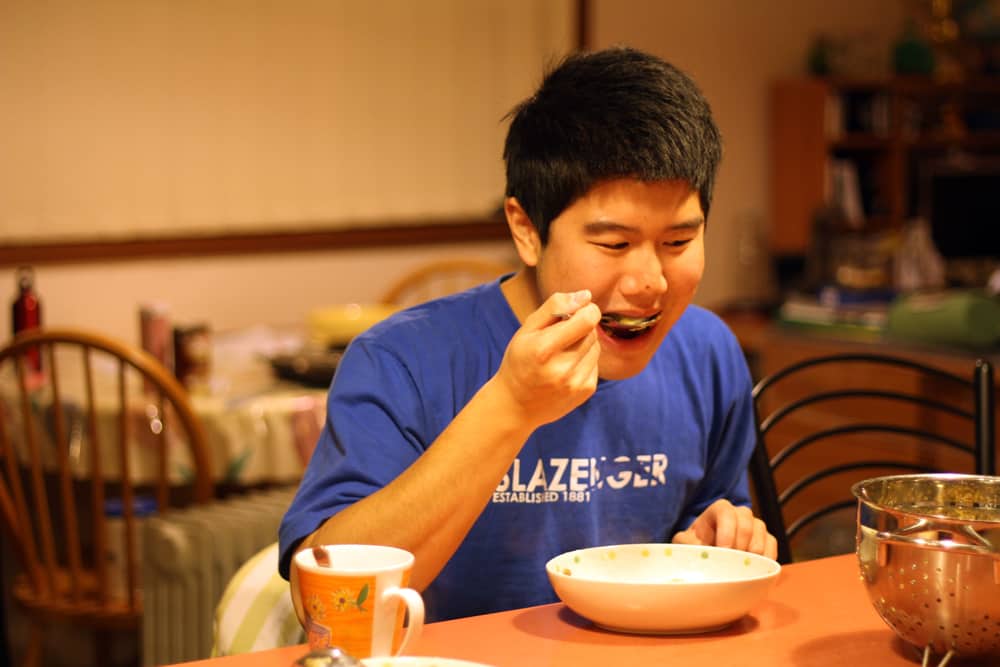 I have some in my fridge now; it’s nice that it became sort of firm after refridgerating. Just a quick warm-up in the microwave and it made some great leftovers for lunch.

For dinner we had Amarula (a liqueur made from cream and the African amarula fruit) with vanilla ice cream and ginger nut biscuits. It was an odd combination, but the Amarula went really well with the ice cream. Pretty tasty. 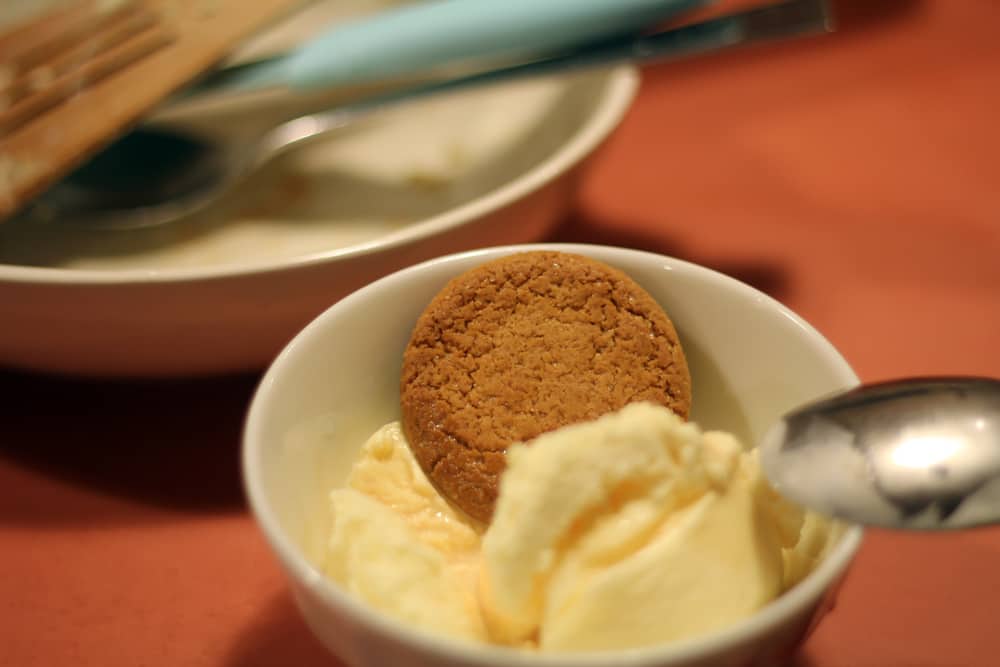 Overall, another successful day cooking! /eee I wonder what we’ll make next? I am quite tempted to make our nice pie again. /drool 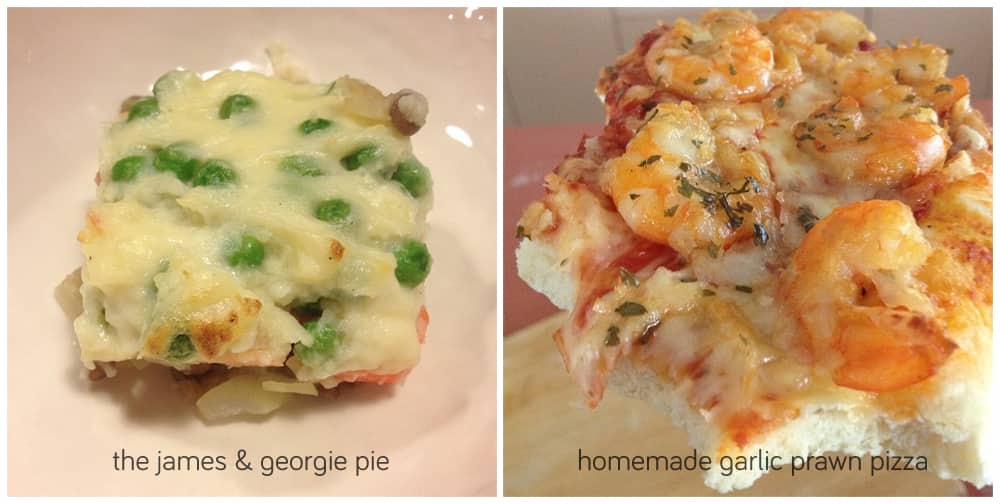 I’ll admit I’m not a big fan of veggies, but I have to say that pie you made does look tantalising! And I like how you said it wasn’t too cheesy on top — too much cheese can make me sick, so I’d definitely prefer it mild :)

Seeing that vanilla ice cream in a tub reminds me of when I met up with an online friend for the first time, way back in September 2006. She bought me a vanilla ice cream, although it was just the ice cream by itself without biscuits or wafers. Then she had a taste of it, and she said it was heavenly! ♥ I think that description has pretty much stuck with me ever since. Needless to say, I took my time with the ice cream so I could enjoy every last bit of its taste. I do love vanilla ice cream, and ice cream in general; I really hope we’ll get to have some together when we meet up! /eee

The pie looks SO NICE!! However, the pizza, does not! :P I really dislike prawns but absolutely love pizza, so combining the two sounds absolutely terrible haha. 🤮 However, I’m happy that you enjoyed it haha.

Oh my goodness…your food photography makes my stomach growl. I thought I could smell the shepherd’s pie – until I realized all I was smelling was the microwave dinner heating up xD.

I am seriously liking that prawn pizza you have there. I bet it tasted and smelled amazing! :D

All the pictures! 🤤 it’s really nice that you two have the knack to cook..wow. I’m the person who’d rather taste and comment rather than cook for myself haha. :P kitchen isn’t meant for me, I guess ….meh, besides I don’t mind living by milk cartons everyday hah
I’ve always wanted to try making my own pizza but yeah, I guess I’m not surrounded by people who like going to the kitchen… *facepalm*
The pie looks so yummyy 😢 wait, correction.. everything looks super yummyyyy 🤤 oh great now I’m craving for pizza.. this is bad for my weight /ehh

When it comes to recipes, it kind of depends what I’m making. I’ll follow recipes if it’s really complicated or something that I can’t really taste as I go (like braises). Otherwise, I think it’s better to do as you said and adjust as you go :)

Both the pizza and pie look so good! I’ve been wanting to do homemade pizza for a while now. I even bought a pizza stone for it, but we still haven’t tried it yet. I also love savory pies!

The “shepards pie” looks interesting :) I love how you altered it to fit your ingredients list and something you like :) I love pies hehe. They’re so easy to make. ♥

LOOONGGG time since I have been here, have a lot of catching up to do! Not a fan of my veggies but you made them look super yummy. I have to say pizza is my favourite. All the photos make me want to start taking photos of my food now from the restaurant I work at.

GIVE ME SOME now ! O_O
That pizza looks so GOOOOD, I’m dying just looking at it. 😏
Good job! But now I’m angry at you… because you didn’t give me any. 😒

Ahh no it’s killing me. I just scrolled back up to take a second look, and am now falling off of my chair onto the hard ground. Look what you’ve DONE! /pow

I expect (repeat: EXPECT) something from your cooking extravaganza next time… 🤤

Oh wow, I’m getting hungry just by reading this post. They look DELICIOUS and now I want some! 🤤

Domain change once again! LOL. Anyway, I’m really liking in what I’m seeing Georgie! You guys did a huge success in cooking! But than again that’s what we artist’ do best is doing art. Think of cooking as an art, and you’ll be good to go! I actually would like to make that Garlic Prawn Pizza. Care to share the recipe with me via e-mail? That Shepherd’s pie is amazing too. I do like my vegetables now knowing what the benefits are from each of them. :).

I’m sorry I haven’t been around much! I’ve been on here and there, but I moved in with my boyfriend, and his grandparents and have a real craptastic internet connection i.e. Dish Network. So I haven’t really been able to do much at all. Plus not only that I did get sick this past weekend. My guess it may be Strep. Not really sure. Had some wicked days where it just wouldn’t quit hurting.

I can barely concentrate because of this cold! But, I’ m glad to say that everything is working out so far! I am paying ISI when I get paid, and that makes me happy. I wish I could’ve paid you but I had no extra money by the time the 5th actually rolled around. Struggling sucks, but I did it and lived through it!